Huizen  –  The FIA WTCC came to an end last year and will be succeeded by the FIA WTCR in 2018. The new category is an international race series for which 26 top-level drivers with top-level cars have signed up to ensure a capacity grid. One of them is Tom Coronel (45), one of the most experienced drivers in touring car racing worldwide. “Of course, I have done everything to become part of this since the first signs emerged, so I am really thrilled that it has now worked out,” Coronel says. In 2018, he will be racing the brand-new Honda Civic TCR. The car has been developed and built by Italian outfit, JAS Motorsport and will be run by Belgian team, Boutsen Ginion Racing. Last season, Coronel already raced a Honda Civic of the previous generation for the team that won the 2017 Benelux TCR title. In the 2018 FIA WTCR, Portuguese driver Tiago Monteiro (41), who has been racing as a works-driver for Honda since 2012, will be Coronel’s team-mate.

Tom Coronel is really enthusiastic about the steps that have been made: “Many people know that this is a development I hoped to see two years ago already. The FIA WTCR is a worthy successor of the FIA WTCC in which I participated every season, but it is fair to say that, from a sporting perspective, I was often making up the numbers in the most recent years. Now, we are facing a new challenge with identical equipment for everybody, at tracks all over the world and for me an excellent situation with a brand-new Honda Civic built by JAS Motorsport and run by Boutsen Ginion. A car that has specially been built for this championship and that allows us to take on the other brands at a level playing field. Personally, I reckon that this could very well be the best season start of my entire career in touring car racing. It certainly is the best package I have had in the last ten years. I certainly dare to predict that this year, I will be at least able to match the total number of trophies I have scored over the last five years in the FIA WTCC.”

Coronel continues: “In the past years, Boutsen Ginion Racing has more than just proven its qualities and for me, the co-operation with Honda Benelux is significant, too. By participating in this championship, we will also promote the brand in the Benelux in many ways. There will be show cars with an identical livery as my race car, last year’s Civic race car will be available for shows and demonstrations. Together with the Honda dealers, we will be making a lot of noise in every sense of the word. The livery of the new Honda will be largely identical to the one I had on my car last year with DHL yellow as the most important colour. The partners I had last year have also committed for this season, so once again, the following names will be on the car: DHL, Eurol Lubricants, Tricorp Workwear, ERU Prestige Kaas voor Kerels, TW Steel, Bouwgroep Dijkstra Draisma, Intrax Suspension, 4.Brands, Allsecur, ASC Group, NoFear Energydrink, P1 racewear, Super-B, CM, Copernica and RSII.”

Preparation for the upcoming season is going well. Coronel: “The good thing is that the Civics are ready. That enables us to start testing well in time. Official test days are scheduled at the end of March and that is when everything really has to be sorted. I am totally confident and I am looking forward to working with Tiago Monteiro who is bringing in his vast knowledge. Another special thing is that we are racing at Circuit Zandvoort as a part of the ‘Jumbo Racedagen driven by Max Verstappen’ on the Whitsun weekend (20-21 May). That is a fantastic event to race in my home country with this new class. Moreover, Eurosport will be broadcasting the championship and a deal with RTL GP is in place to cover all the races including the TomCam and the usual GoPros in and on my Honda. Of course, we will also be present on Facebook, Instagram, Twitter, my YouTube channel and my own Tom Coronel app, so nobody has to miss out on any of the action. A new thing is that we will have three races every weekend, one on Saturday and two on Sunday, and that on ten weekends all over the world. As a result, there are thirty races counting towards the title with many different brands and top-level drivers out to compete.”

Finally, Tom Coronel briefly looks back: “For seven years, I have enjoyed a fantastic co-operation with Roberto Ravaglia’s ROAL Motorsport team. When the FIA WTCR plans came up, he soon made it clear to me that he would not be able to realise such a project in time, so after years with highs and lows, we split in a harmonious way. I will certainly miss Roberto Ravaglia, Aldo Preo and Pietro, who was my engineer for seven years. And the same can be said for the best coffee in the paddock! But now, it is on for a new adventure. I can’t wait to push the throttle in my new Honda.” 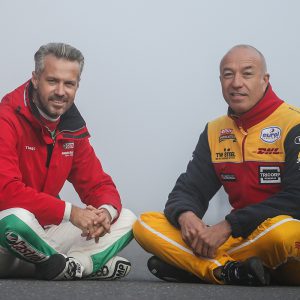