Race against Tom Coronel in the race game and win!

VILA REAL (23 June, 2017) – This weekend, Tom Coronel will be racing his ROAL Motorsport-Chevrolet RML Cruze TC1 during the final European race weekend of the FIA WTCC season at the Vila Real street circuit in Portugal. After the summer break, the season continues with events outside of Europe, but prior to that, fans of Tom Coronel can enjoy the possibility to virtually race their idol’s DHL yellow Chevrolet at Circuit Zandvoort, and win beautiful prizes while doing so! The ‘Tom Coronel Competition’ as a part of the RaceRoom Racing Experience runs till 12 July. Participation via the link http://bit.ly/Coronel_Competition is free and every driver can drive as many laps as he or she wants.

“Of course, it is a pity that we aren’t racing at Circuit Zandvoort with the FIA WTCC, but this is an experience that comes closest to the real thing,” an enthusiastic Tom Coronel says. “In this game, everyone can drive my current car, the 2017 ROAL Motorsport Chevrolet that I will be racing again at Vila Real this weekend. This RaceRoom Racing Experience is fantastic: the rendering is very realistic, you recognise every detail of Zandvoort, or many other circuits, for that matter. It is a game, but the cars are very natural, physics are like in the actual race car. Everbody can play online for free and those who want more can purchase additional elements online. And anyone doing well in the ‘Tom Coronel Competition’, or having a little bit of luck, is in with the chance to win great prizes.”

The goal of the competition is to drive the fastest virtual race lap of Circuit Zandvoort with Tom Coronel’s ROAL Motorsport Chevrolet RML Cruze TC1 with starting number 1. Those who end up in first, second or third place at the end of the competition, that runs till 12 July, will receive an exclusive Tom Coronel package that includes a shirt from the Tom Coronel collection, a scale model car in 1:32 of Tom Coronel’s WTCC race car, a key chain and a signed autograph card. Two fortunate winners who will be picked from the participants at random will also receive such a package. Then, there is one package each for the one who makes the most beautiful screen shot of Tom Coronel’s car in action, and for the one who makes the best video. Winners will be announced on 12 July. 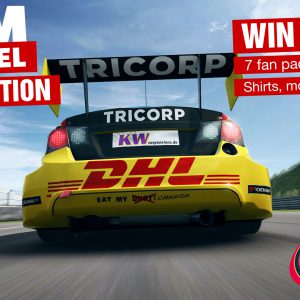 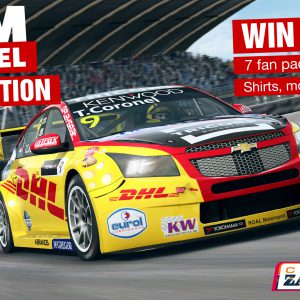