UTRECHT –it is a buggy again after all with which twin brothers Tim and Tom Coronel will be participating in the Dakar Rally from 6-20 January. This time, however, they will not be running separately in South America. Instead, they will be sharing driving duties in the car they have commissioned from Jefferies Racing in Apple Valley, California. Based on the regulations of the American Baja committee SCORE, this is again referred to as a buggy, but in sharp contrast to the rather fragile solo buggies, this car has a ‘Hummer-like’ and rough appearance, so that the new car of the Coronels has already lovingly been named ‘The Beast’.

“I will never ever be driving on my own again, I really have had enough of this,” Tom Coronel said after the tortures he had endured in the world’s toughest off-road event last January. “I would like to drive together with Tim again, but then in a different project.” His brother fulfilled this wish after having had the advice from Dakar participant Kees Koolen to talk to American Damen Jefferies. Filled with pride, the Coronel brothers showed the result of the co-operation with the famous buggy constructor during the launch event at the CineMec cinema centre in Utrecht. Next Sunday, the new rally car can be seen in action at the occasion of the RTL GP Dakar Pre-Prologue at the Valkenswaard circuit.

“What kind of car would you build yourself,” was the question Tim Coronel asked Jefferies, giving the latter the freedom to come up with a car that is ‘Dakar proof’. “After all, for us it is about the adventure and making it to the finish. For that, we also take into account the fact that the car actually is 300 kilograms too heavy. Damen admitted to that, but he also added that we would be able to make it to the finish that way.” That is Tom Coronel’s goal, but he also expects to be reaching the stage-ending bivouacs in daylight. “That would be nice for a change,” says Coronel, who spent the majority of the time driving in the darkness during his previous Dakar adventures. Once again, he will have his TomCam on board to document his experiences for RTL GP television.

For Tim Coronel, it will be his eleventh participation in the Dakar Rally. Tom Coronel will be taking part for the fifth time. The last time the twins drove together was in 2009 when they alternated behind the wheel of a Bowler Nemesis. In January, they will again be alternating in the driver and co-driver positions. They already got their first taste of driving the rear-wheel driven Jefferies buggy during a test session in the deserts in the Los Angeles area. The car has a weight of approximately 1,850 kg and is powered by a 6.2 litre Chevrolet LS3 engine with an output restricted at 400 hp. The transmission is a semi-automatic Albins gearbox while Maxxis again is the supplier of the 37 inch tyres. The vastly experienced Dakar specialist Chris Leyds has been appointed as the team manager.

The 40th running of the Dakar Rally, held in South America for the tenth time in 2018, will get underway in Lima, the capital of Peru, on 6 January and finishes in Córdoba in Argentina on 20 January. Halfway through the event, there is a rest day in La Paz, the capital of Bolivia. Equipment is being loaded for shipping out of the French harbour city of Le Havre on 23 and 24 November. 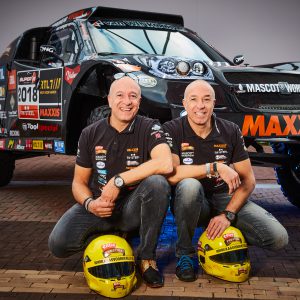 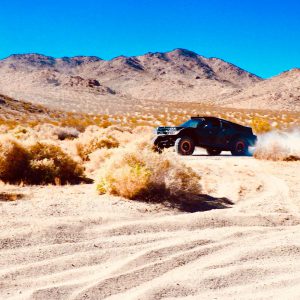 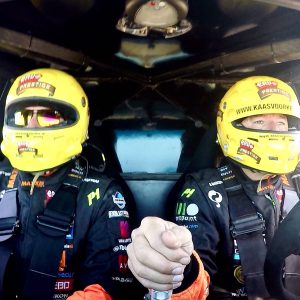