[:en]LIMA – After months of preparation, the 2019 Dakar adventure is now about to get underway. Tim and Tom Coronel are totally ready for it.

Scrutineering took place in Lima on Saturday. An important and exciting moment: without the necessary stamps, no team is allowed to take the start. Moreover, Tim and Tom and their team have been working day and night for months to develop ‘The Beast 2.0’. A slight mistake can have major consequences. “It was thrilling, but we were given the all-clear!” Tim reported enthusiastically. “Everything is ready and things are looking good. Scrutineering went really well. We are ready, everything is under control.”

The car had to spend the night in parc fermé before the traditional podium ceremony took place on Sunday evening local time. Thousands of excited fans provided a warm welcome for the twin brothers. “What an atmosphere, what a crowd. Unbelievable,” Tom said with a smile from ear to ear on his face. “If we wouldn’t have been looking forward to it already, we certainly are now! On Monday, the party is starting in earnest with a serious warm-up.” Tim added: “Yes, now it is for real. This is what we have been looking forward to for months. I can’t wait. But now we first will go and have a few hours of sleep tonight, we will be needing it!” 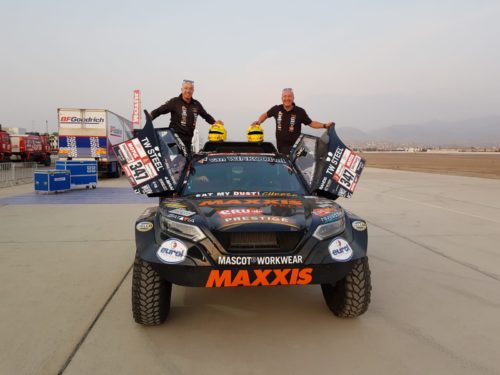 The first stage is relatively short with only 84 competitive kilometres. However, it may be deceptive, because the itinerary through immense sand dunes is tough. Last year, several competitors got stuck. “Usually, the sand suits us, but it is also really treacherous and dangerous,” Tom says. “My brother is really strong in the dunes, so he will be doing the driving on the first couple of days. After about four days, the roads will include some more stones and then I will be driving as well.”